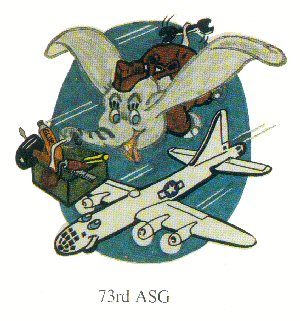 The 73rd Air Service Group arrived in Guam on April 14, 1945.
Subordinate units were:

Except for the initial cadre, most of the personnel came from the 337th Service Group which had recently returned from overseas duty in Alaska. The requirement of repeating basic training caused considerable grumbling. Many of us had learned those duties three or four years before.

A three day bivouac in July in Yosemite National Park was the best camp out anyone could ask for. The relief from the San Joaquin Valley heat, which averaged about 100 degrees during the day, was most welcomed. Trying to escape that heat was almost useless as air conditioning was practically non-existent. So, enjoying Mother Nature's cool weather at the 4,000 foot elevation, the beautiful smell emitted by pine, birch and redwood trees was an enormous morale booster. So much so that almost everyone did not want to return to Fresno.

Fresno, a lovely city of 65,000, had bus service to and from the fairgrounds. Three of the most popular off duty places were the Rainbow Ballroom, Roeding Park with its zoo and picnic grounds and the USO.

On 1 September 1944 the 73rd Service Group, minus the men in training at the Air Command Training Center Schools, boarded a 10 car troop train for a three day trip to Pratt Army Air Field, Pratt, Kansas to complete their final phases of training before being ordered overseas.

Living conditions at Pratt were poor compared to Fresno. The enlisted men lived in six man plywood huts. The pot bellied Sibiey stove in the center of the hut offered little comfort during the winter, especially when the cold Kansas wind blew. At night, to keep warm, most men slept with their backs towards the stove. They took turns stoking the stove throughout the night to keep warm. Meals were served by the 586th Engineering Squadron and Headquarters & Base Service Squadron. The 580th Materiel Squadron had to eat in those messes until their mess hall was completed on 1 October. Each man now had to eat from his mess kit. Gone were the steel trays and the KP's to wash them.

A change in the TO&E (Table of Organization and Equipment) deleted one officer and seven enlisted positions because the central fire control section was being eliminated on the new B-29's coming off the assembly line.

One of the most interesting events while at Pratt was the staggered plant tours offered by Boeing Aircraft Company in Wichita. The full day tour enabled all 73rd personnel to watch a B-29 being assembled from scratch to finish. Boeing executives did not object to technical questions asked of their assemblers. In fact, it was encouraged. As most of the Boeing workers were females, a common non-technical question was, "What are you doing after work" or "What time do you get off?"

In December 1944, the group completed the bulk of their training and passed their POM (Preparation for Overseas Movement) inspection.

January 1945 activity dealt mainly with packing and crating of equipment for overseas shipment and processing all officers and men at the Pratt AAF Base Processing Unit. Overseas training unit equipment was returned to the respective base units. Also, the 586th Engineering and 580th Materiel Squadron and the 73rd Service Group titles were changed to include "Air" in front of their name. A new pass policy was effected whereby any enlisted man who had not been on pass since 17 December, was issued a three day pass as a last pass before moving overseas.

A comical incident happened while awaiting movement to the POE (Port of Embarkation). Major Charles D. Payne, 586th Air Engineering Commander, decided to award the Good Conduct Medal and scheduled the ceremony in the base theater for a Monday morning. Meantime, Captain Morton, who was a pilot, decided to fly home to Chicago for the week-end and took First Sergeant Witt along. Bad weather in Chicago prevented them from returning Sunday evening. The next morning squadron personnel reported to the theater for the ceremony. Presentation was highest rank first and so on. First Sergeant Witt's name was called first. Silence. Major Payne repeated it twice again with no reply. After a few seconds of silence, someone in the rear of the theater bellowed, "He's AWOL, Sir" and everyone in the theater exploded with laughter.

As the group had to wait about two months from the readiness date for the port call, some men had not been home in over six months. To help morale, those who lived close were given a final three day pass in late February 1945.

On 5 March, orders were issued transferring the group to the Port of Embarkation, Ft. Lawton, Seattle, Washington. One man in the 586th Air Engineering Squadron was AWOL (Absent With out Leave). As the troop train started to move, he was seen running down the center of the train tracks trying to catch us. As the train speed slowly increased he gradually fell further behind until he gave up. The big surprise was that he greeted us when we arrived at Ft. Lawton on 12 March. He beat us by two days by hitch hiking across country. Weather wise, Seattle was cloudy, gloomy and it was drizzling that day.

Processing at Ft. Lawton began immediately, i.e., physical exams were completed, clothing inspected, instruction given on care and cleaning of weapons, preserving clothing and equipment, how to board and debark a troop ship, etc.

On 16 March, every one boarded the USS Dorothea L. Dix, a naval transport also used during the First World War. The Dix departed Seattle late that afternoon and everyone believed it was headed directly for Pearl Harbor. On the morning of 19 March, everyone was shocked to see the ship steam under the Golden Gate Bridge into San Francisco Bay to take on more equipment. That evening as the Dorothea L. Dix plowed through the waters headed out into the Pacific, many of the men looked back at the thousands of lights illuminating the San Francisco skyline. Suddenly, someone hollered, "Golden Gate in 48" and almost immediately everyone began chanting it.

Two days out from Pearl Harbor it was announced over the ship's public address system that group personnel would be allowed to go ashore. Morale was at fever pitch in anticipation of visiting the Pacific paradise - only to be shattered the next day when the order was rescinded. While the ship was being refueled and some repairs made, a few men were detailed to help replenish the ship's supplies, but they were confined to the immediate dock area. However, officer representatives of the squadrons were permitted ashore to buy magazines, newspapers and edible items. These were furnished and paid for from the squadron's funds. The ship was anchored at Pearl for five days. To ease the monotony, movies were shown. Many played card games.

The morning of 29 March, the Dix joined a large convoy with destroyers for escort and headed for Eniwetok. Life aboard the Dorothea L. Dix was not ideal. Food served in the enlisted mess was not good quality and the dehydrated food which the men had not eaten before was very unpopular. One item that was very well liked was the fresh hot baked loaves of bread. The men constantly bummed loaves from the naval bakery personnel. As a result, the bakery men had a hard time keeping up with the demand. After a couple of days, word reached the ship's officer about the bread demand and immediately we received the order to stop. Since the sailors discussed their good food with our men, it did not popularize the trip. The ventilation system was poor, so most men spent their time on deck. To keep morale up, administrative personnel typed the payrolls in cramped quarters in the holes of the ship. One man had only four feet between the floor and the ceiling, sitting cross legged and bent over while typing with only a 25 watt bulb to see by. On 1 April, the ship crossed the International Date Line and everyone received the "Sacred Order of the Golden Dragon" membership card. The ship stopped a short time at Eniwetok and arrived 11 April, at Apra Harbor, Guam. The next morning we climbed down the ship's rope ladders and were trucked to Northwest Field. The jungle area assigned had just been cleared the day before.

The first few days we slept in our pup tents until large tents were put up for sleeping quarters. The orderly, supply, mess hall, dispensary and dental tents soon followed. Drinking water had to be trucked in and poured into lyster bags. On 14 April, memorial services were held for President Roosevelt. During the rest of the month the group furnished men to help the Army Engineers work on the landing strip, parking aprons and the operations tower. They operated the jack hammers, loaded coral into trucks, loaded and unloaded supplies from trucks. While this was going on our area grew from a jungle to a liveable camp.

In May the permanent pre-fabricated buildings were erected by our own men. Also, they helped build the El Gecko Theater which had the largest stage on the island. Seating capacity was about 2,500 and the famous entertainers who came from the states to put on the USO shows always played to a full house. Towards the end of the month each person's points were computed as the war in Europe ended 8 May.

Beautifying the group area was constantly progressing. Coconut palms dotted all areas and some men planted small gardens. Coral sidewalks were a must to prevent having to walk in the mud. The beaches were very popular during off duty hours.

After the atomic bombs were dropped on 6 and 9 August, morale reached a fever pitch in anticipating the wars end. During August, all officers and enlisted men were placed on detached service to the 76th Air Service Group except for one officer in each of the three squadrons. This consolidated the four service groups into one, thereby placing one commander in charge, responsible for all the groups activities. For all practical purposes the 73rd Air Service Group ceased to exist.

On 2 September, the Japanese surrender took place aboard the USS Missouri. Soon after, the men of the group started returning home.